One of my most problematic experiences from all Indiegogo projects I back. Not because of Crazybaby, the company who ran it! They had some performance issues when it came to relying on shipping questions. It’s understandable given the vast volume they had to ship.

My experience was because of the illogical, hard to cope with Bulgarian Customs authorities, and more specifically – the Bulgarian Post station, responsible for receiving and keeping items pending Customs release.

I backed two pieces of Air. One white (for Vesi) and one black (for me). Due to overload, Crazybaby shipped one of the items first item (the back Air) somewhere September. It was sent from the EU, but for some weird reason 20 days later it got stuck in Bulgarian Customs’ Post station. They asked me to supply them with documentation for releasing the order, as they wanted to charge me (probably) VAT.

Now, the logistics issue was the fact I had one order, on which I had two items. But I received half of the order. Bulgarian Customs are not among the most flexible ones: they refused to accept half-delivery and said that if I go like that, they’ll have to charge me full VAT. I was okay with that, but I required from them to confirm that when I receive the second half of the order, they won’t charge me again full VAT, based on the paperwork (which is, still, for two items). Customs Officer in charge said that there’s no way they could do that: when the second thing comes, they’ll charge me again based on the paperwork, e.g., 20% VAT on the full order.

I was not very happy. I don’t like being screwed, especially by inflexible and bureaucratic government authorities. It seemed incredibly unfair to pay 40% VAT just because some government clerk cannot divide one by two! Because of this, I asked the Post Station to keep my item, until the second shipment arrives.

The Post Station employee assured me they’d do so. I happily came home (actually, at the office), and I continued my wait. 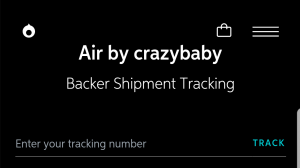 Twenty-something days later I received the second shipping tracking number! Good times, I thought, soon I’ll get both Air. I phoned the Bulgarian Post to share the good news with them. When I told them the first shipping number… they were not able to find it in their database!

I was like “whaaaaaat?”
They were like: “well, you didn’t come to release it on time, and a month after we initially received them, we just returned it as undeliverable.” They obviously forgot I was there, no one made a note of my case, and as a result, they did “the standard thing they do.”

It’s easy to say I was quite furious. Now I was expecting the second package in few days, and the first was already traveling back to Netherlands. Stupid, stupid, indifferent government bureaucrats. I expected the 2nd box to have the same fate… and wondered what to do.

Interestingly enough, the second package was not held by the Customs. They apparently have some filtering system, which kept the first package but let the second one go. I received the parcel directly at home, to my great pleasure. Well, my wife’s happiness, as these were her Air.

I contacted Crazybaby. I was happy to hear they’ll reship the second package again, at no additional cost. Now it didn’t matter: even if the Customs held the box, I’d just go and pay the full VAT for the import and get them. Crazybaby did the shipping shortly after I contacted them, and I started waiting.

Today, after so much waiting, I finally got them. Again, directly at my home. This time they did not get held in the Customs, it seems the Customs’ filter loved me still.

I’m one happy camper today. I can finally mark all todo items, related to this issue, as “done.” I can finally indicate to Crazybaby this whole saga is over. Also, I finally got my headset!

One of the best things about this product is the fact the buds are going entirely in your ear. They’re wireless, e.g., not connected with wire even between themselves. They’re very high tech, so their bodies are small, and they set the ear. They have very tight grip, and I don’t expect they’ll fall out easy. Another great addition is they go within a very sleek tube, which is rechargeable as well. E.g., while the buds are in it, it charges them. Excellent solution. The aluminum tube is also protecting them, making it much harder to lose one of the buds somewhere!

Next time, if I’m not too lazy, I will post about the unboxing experience of this great product. But not now: I see they’re charged, so I go and give Air a spin.